Giving Samuel a Ray of Sunshine 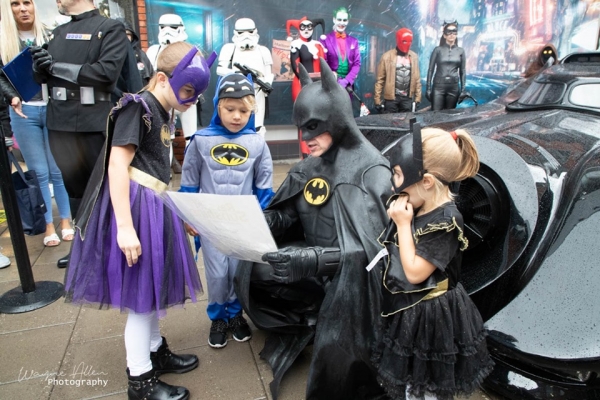 Saturday 7th September and Invasion Colchester 2019, one of the most loved events in the UK Garrison calendar takes place again, with over 50 members from the UK Garrison and Reel Icons in attendance, along with Rebel Legion, AvP, R2 Builders, and the Mando Mercs, and this year like every other was going to be special...

…but it was made even more special for one particular young man by the name of Samuel.

Samuel was born with severe heart defects, undergoing lifesaving open heart surgery at just 6 days old, and again at 3 months old, with his parents Ricky and Vicki at his bedside the whole time.

At the age of 2 Samuel started to deteriorate rapidly so Great Ormond Street Hospital in London bought him back in for his 3rd open heart surgery. Thankfully this has been the last major surgical procedure to date. However.. and it’s a big however.. its helped but not completely fixed Samuels heart, and now they are just waiting for it to fail again.

There are no more surgical options open to Samuel now. There's only one cure left and that's a heart transplant. Ricky, his father said “We don't have any time scale on this.. it could happen tomorrow or maybe in 5 years, we just don't know but it will come eventually. Samuel is incredibly brave and lives and leads a normal life of any little boy; he goes to school, he has girlfriends, he's just a normal kid who loves his Marvel and DC super heroes and Power Rangers."

Whilst they were in great Ormond Street for his 3rd open heart surgery, the Rays of Sunshine charity approached them and asked if Samuel would like to ‘make a wish’. It took some time for him to recover before his parents were able to ask him… and his answer was simply “I want to see my super heroes at Disney” ..so he wrote his wish and sent this to Rays of Sunshine.

A few months ago Samuels wish was granted by the charity. “We had no idea how to tell him so I contacted Colchester Invasion people through Facebook, which led me to the UK Garrison, and for that I'm truly grateful, because what you guys did will be an everlasting memory for all of us... it's about making memories for Samuel and you certainly did this for him”

Unbeknown to Samuel, our Reel Icons Batman and Cat Woman, along with local costumers the Joker, Harley Quinn and Spiderman were lying in wait around a full size working batmobile to surprise him (and the gathered crowd) and present Samuel with his wish on behalf of Rays of Sunshine. The family will be flown out to Walt Disney World in Florida (yes, he has to take is sisters with him, much to their delight) so his wish can come true and he can meet his super heroes.

Samuel, Daisy and Betsy got to meet and chat with several of their favourite characters up close on Saturday and sit in the batmobile with batman. 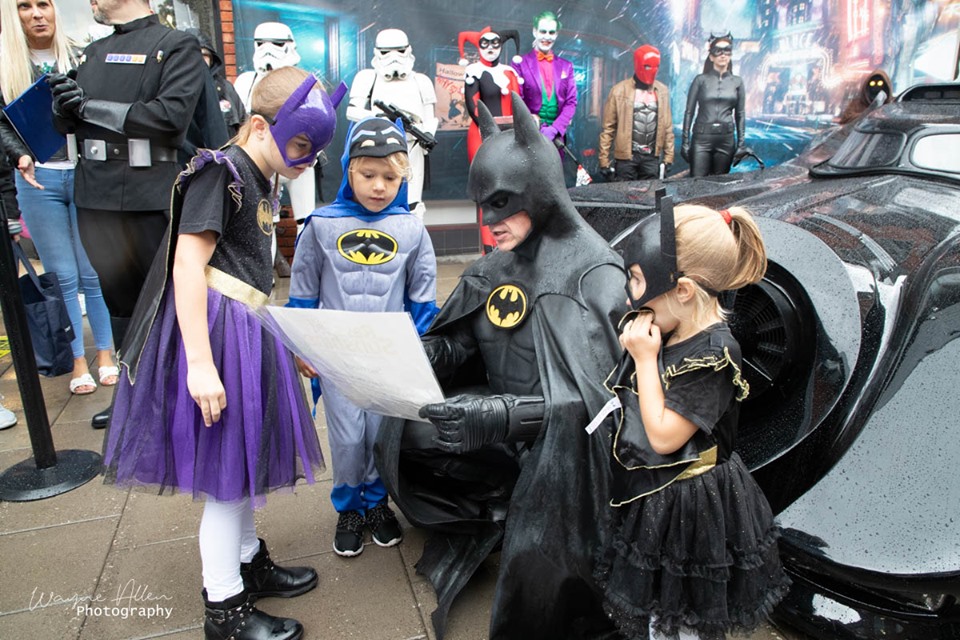 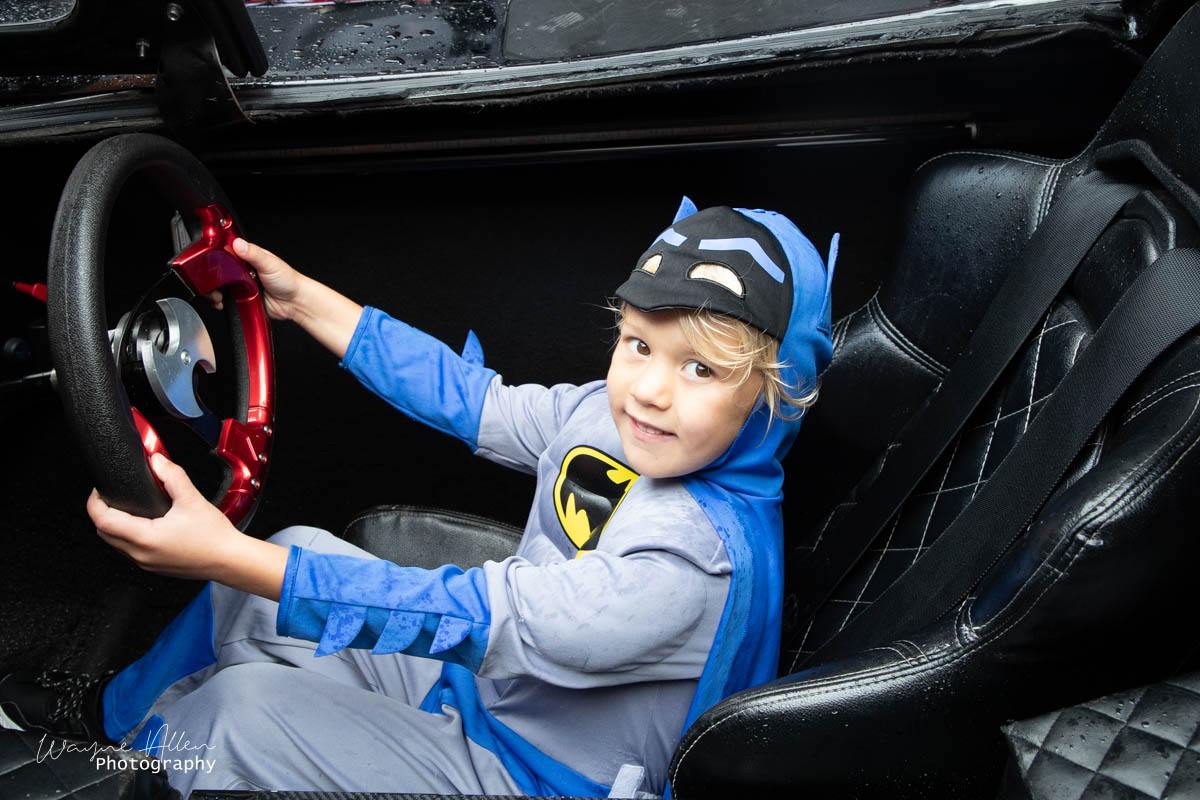 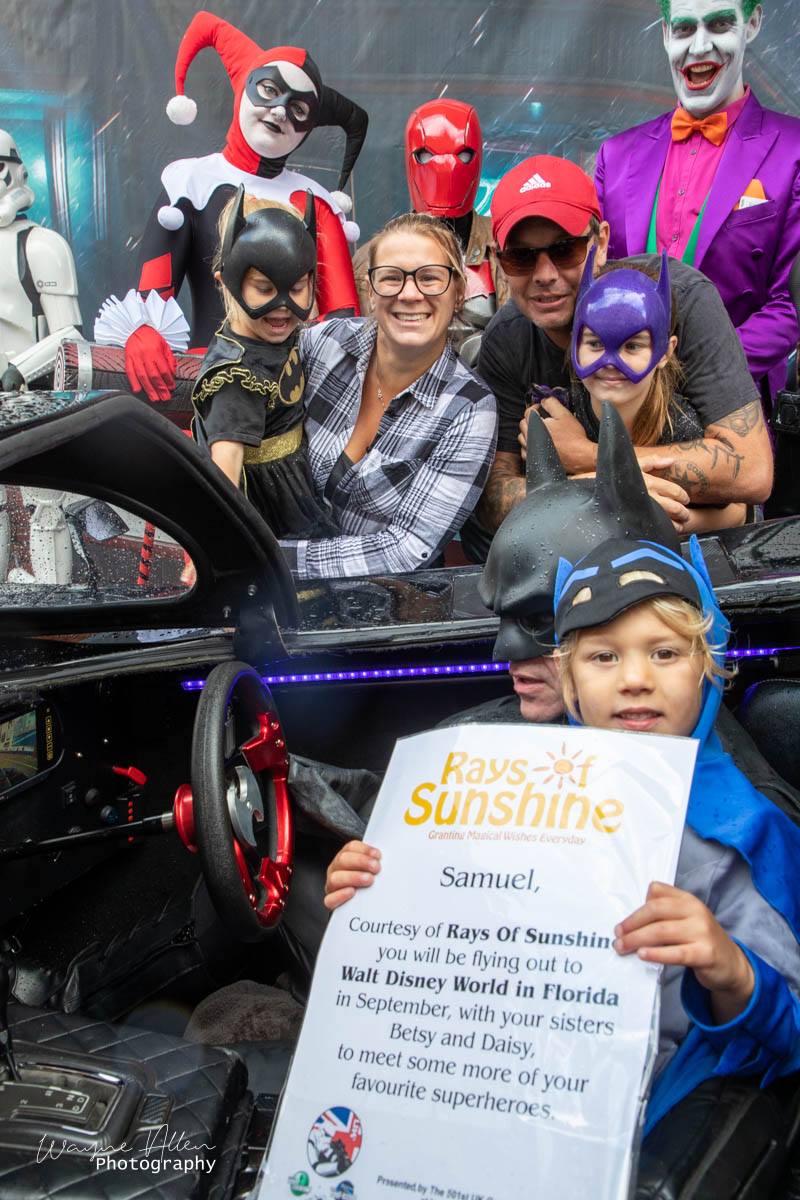 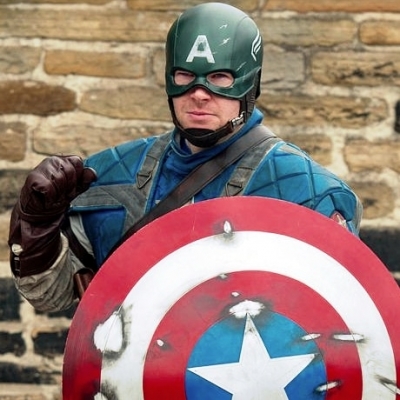 We would like to congratulate one of our own, Colin Wilby on his recent appointment as a Derian House Ambassador. Derian House Childrens Hospice provide vital care for life threatened children and young people and provide support for their families. Colin is an Event Administrator with the UK Garrison and has numerous costumes including Captain America, Indiana Jones and Stormtroopers. 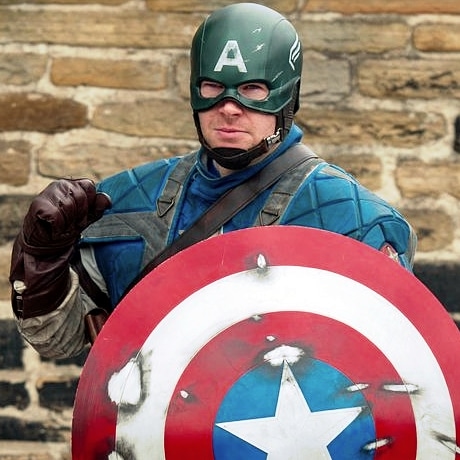 The UK Garrison meets one of its youngest fans

The UK Garrison were delighted to have one of our little fans visit us at the Manchester MCM Comic Con last weekend. Gideon and his family have been going through a rather tough time throughout 2019 so we were delighted to see him and his parents on Sunday, especially after he'd been though some 80 hours of chemotherapy that week.

Thank you to both our troopers and our friends on the stand at Rebel Legion UK for taking the time to make their visit to the con just a bit more special. 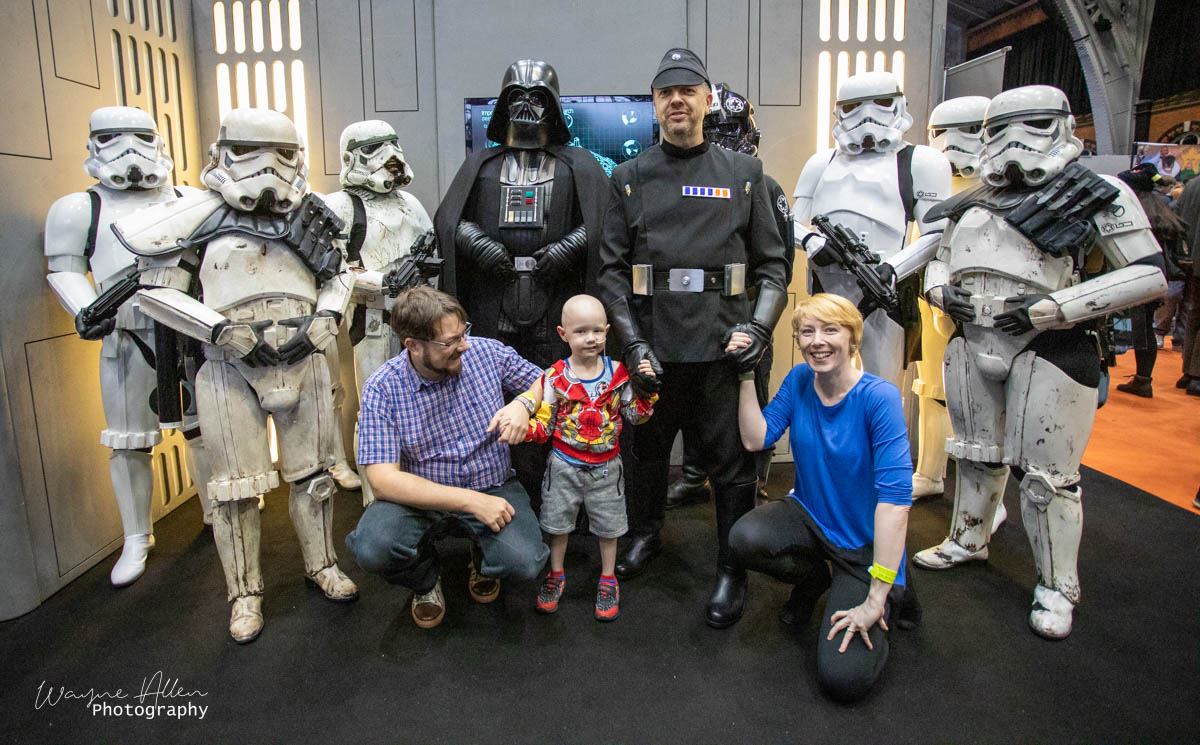 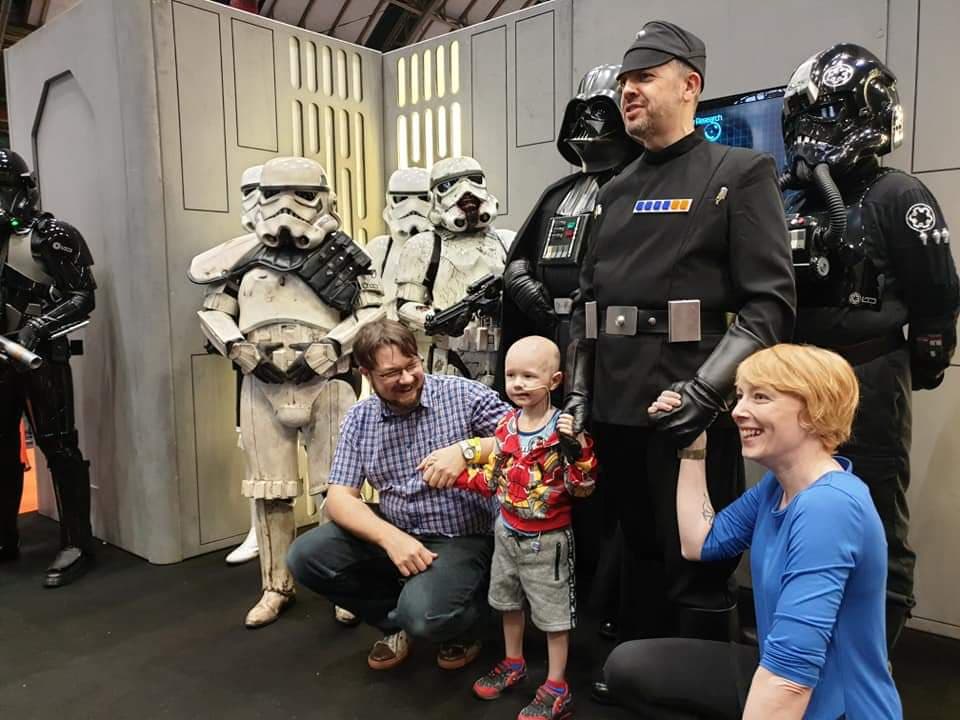 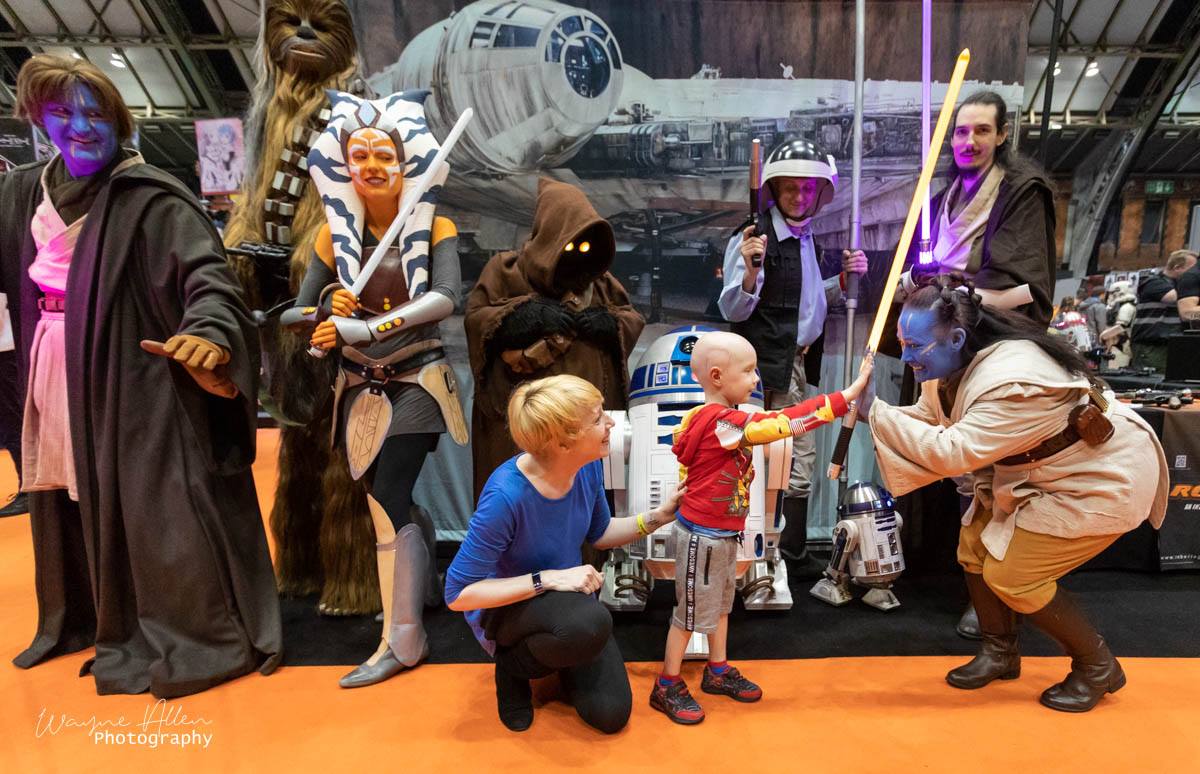 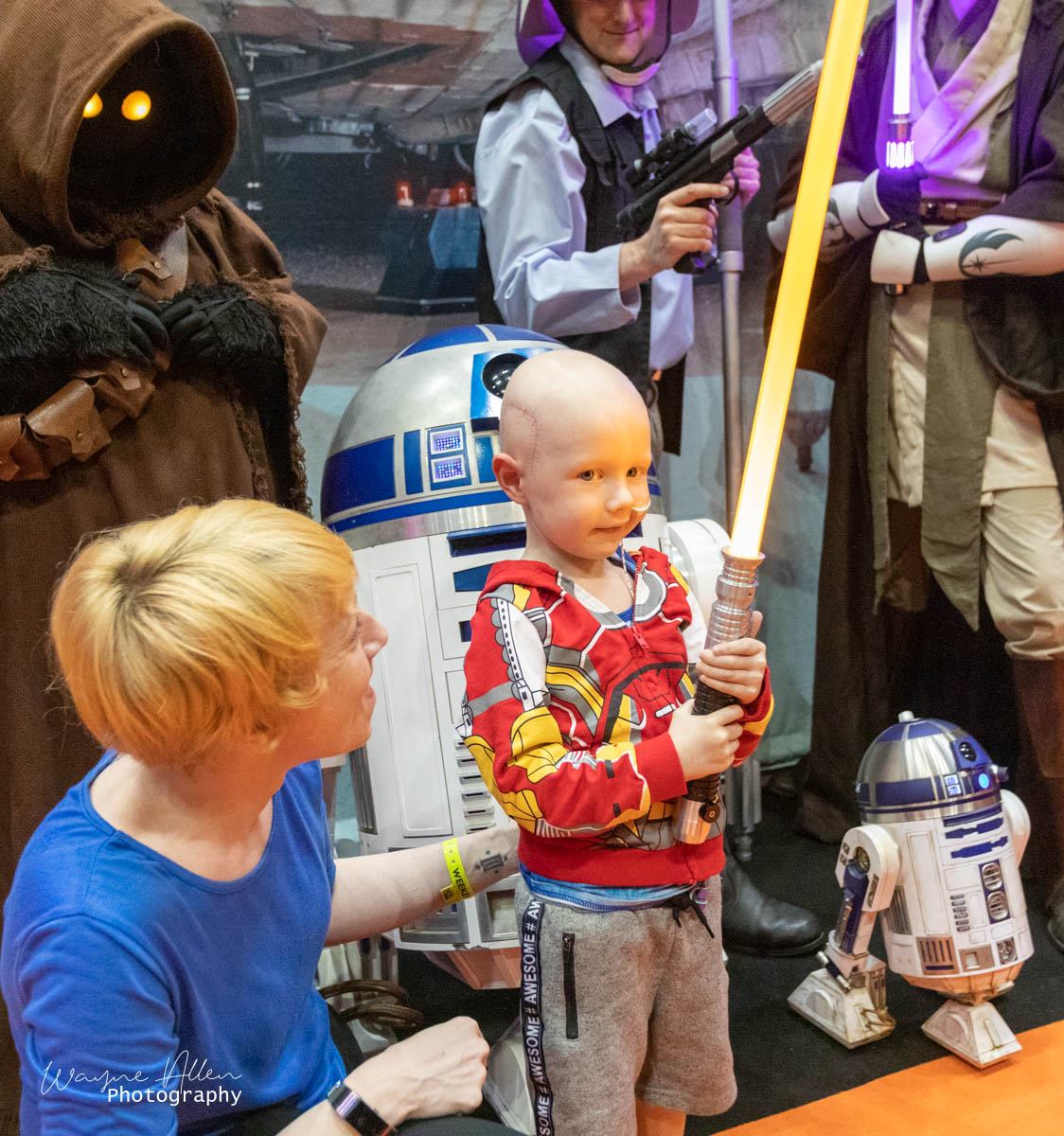 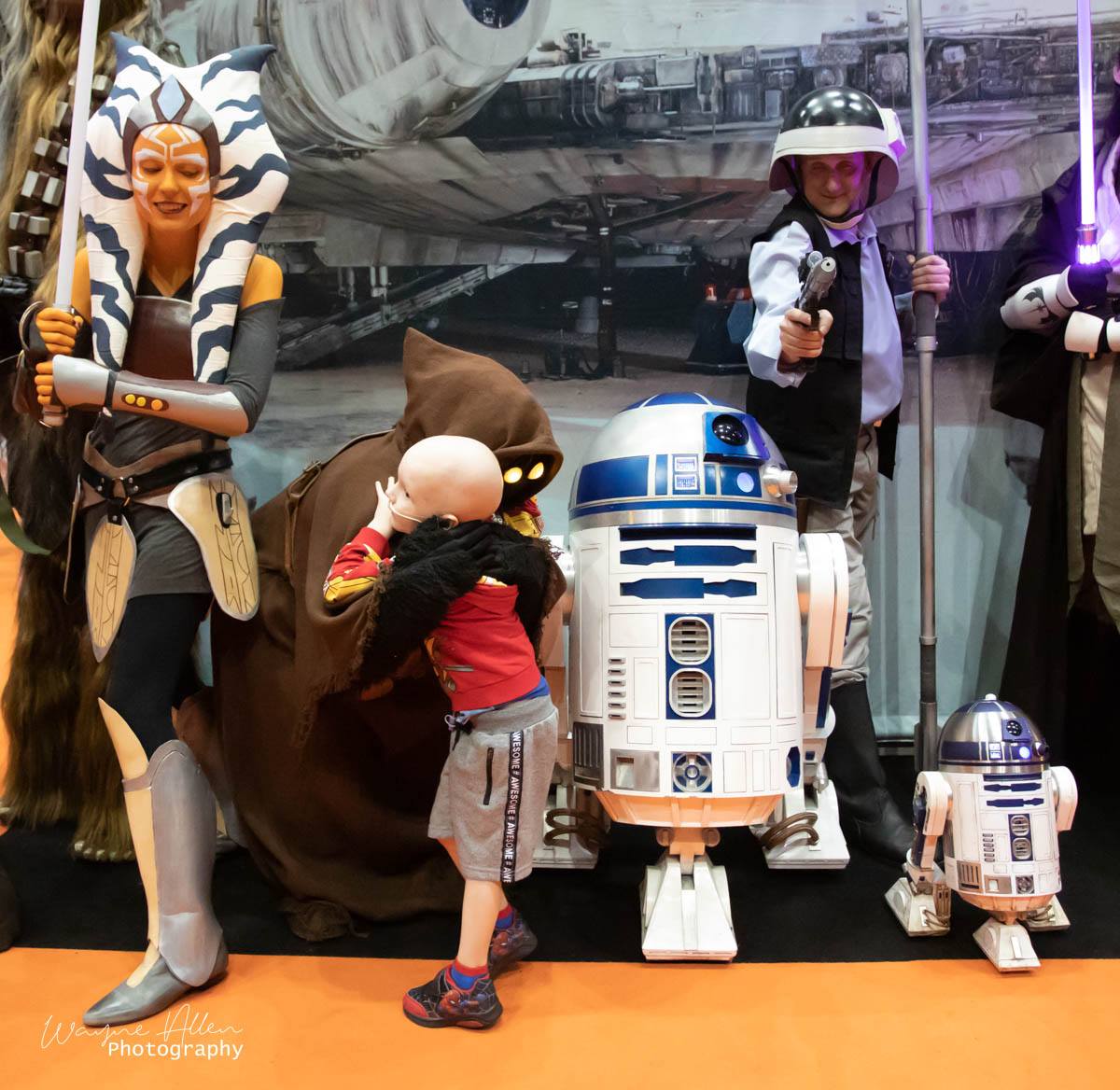 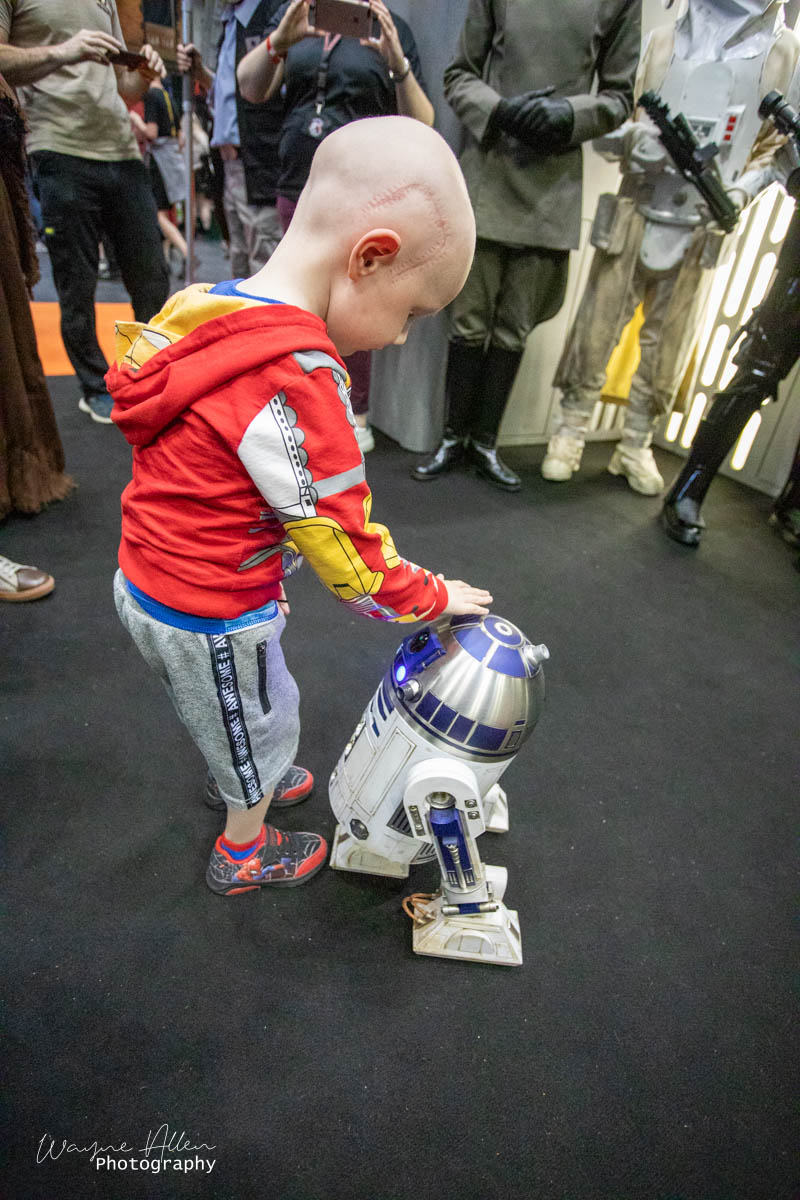 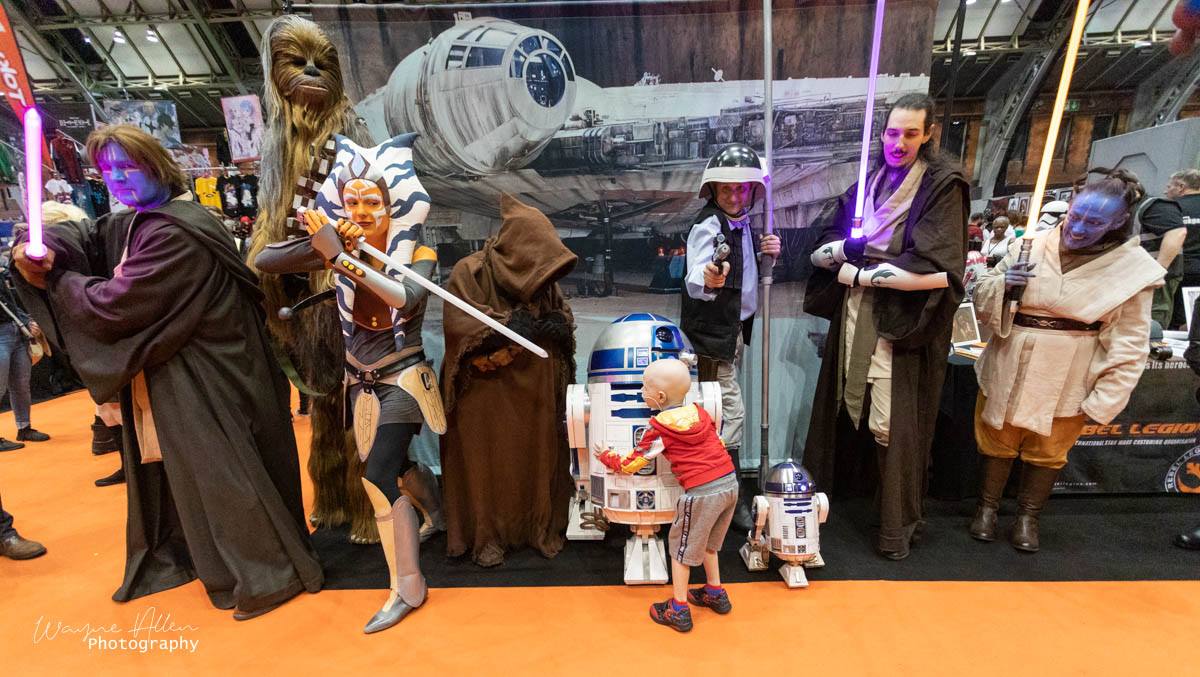 I want to be a stormtrooper - the Journey

Thought it would be nice to share this story from one of our members (David Forsey) about the journey our newest member has been on recently.

"One November MCM a small lady approached the UKG table to discuss her dream to become a stormtrooper but had fears that it could not be done due to her 5ft 1 height. Fellow member Chris Hobbs gave her some advice and pointed her in my direction as I was the First Order Stormtrooper armourer at the time. 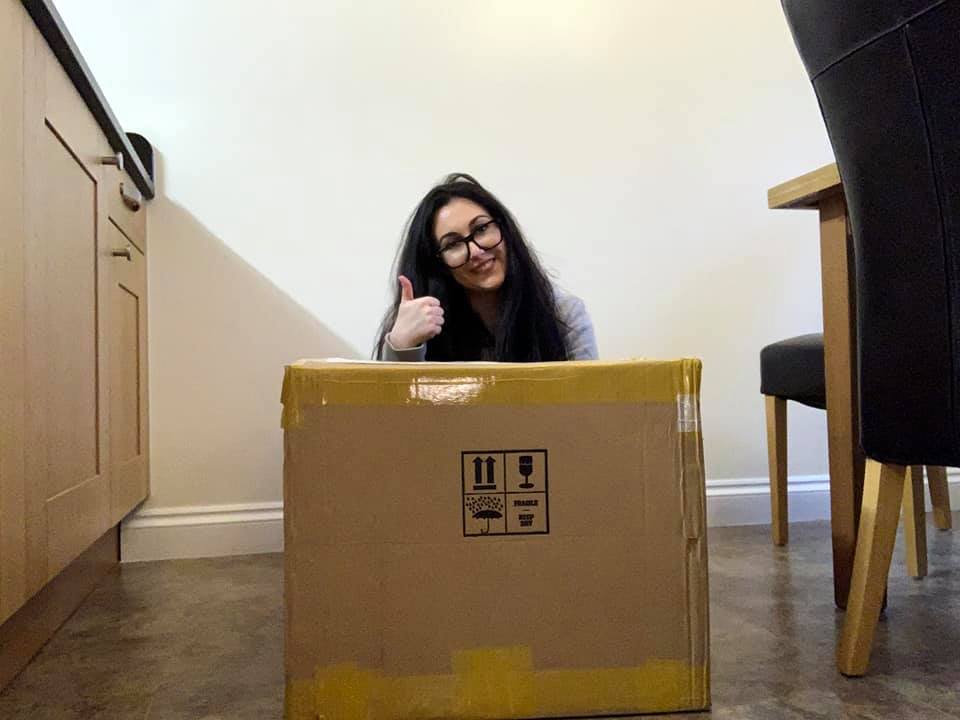 After a few discussions I decided to set us a challenge to prove that whatever your dreams, with a bit of managed expectation, effort and desire, you can do things beyond what you often think yourself.

Stefan Wickham kindly allowed us to use his workshop to cut down the kit and prepare for sizing. As Stefan is our Chief Armourer, he also gave valuable advice and guidance during the critical phase of cutting the armour to fit a standard 6ft frame down to 5ft 1. 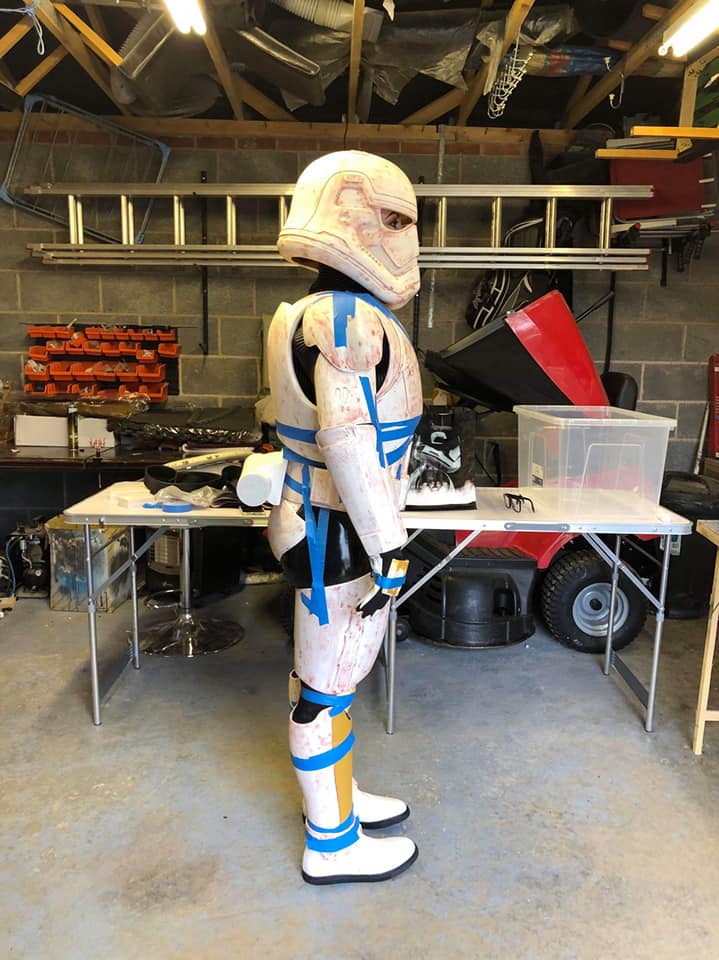 Once we all got stuck in, we ended up with something that looked like it could work, but there was still a long way to go with more cuts, height scaling and a ton of surface preparation. 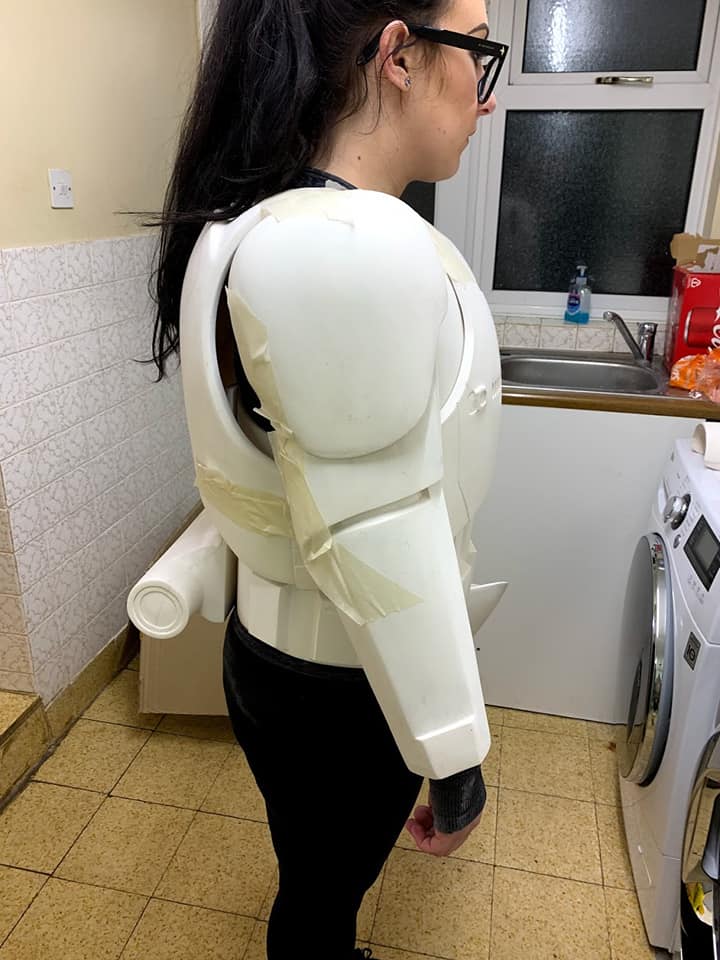 Luke Daley at JJ Industries supplied a scaled blaster, so as long as we could pull together we had everything to conclude.

Many hours later, we got to a point of submission and the armour was cleared after a few helpful hints. 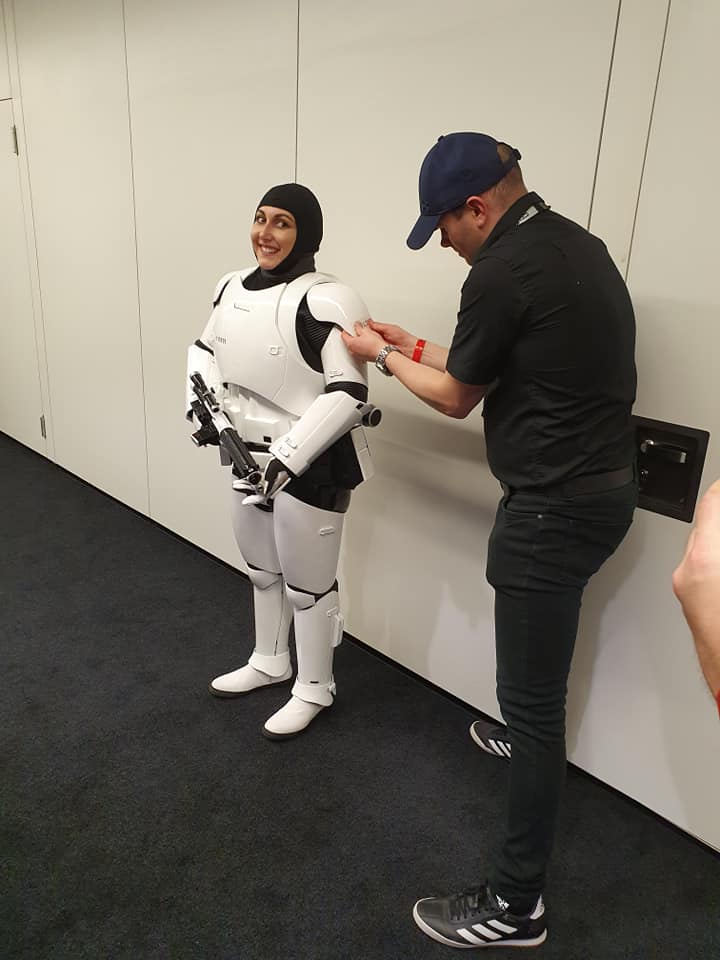 This weekend at MCM Manchester saw the conclusion and Jodi Hook was branded, completed her induction, and is now a fully fledged AND the first female First Order Stormtrooper in the 501st UK Garrison. It's been tough, it's been frustrating but it's been achieved...I present a snap shot of the journey, but it is a clear example of how our great club brings everything together to add value to others and new members.

Just shows we can make dreams come true for our members too. 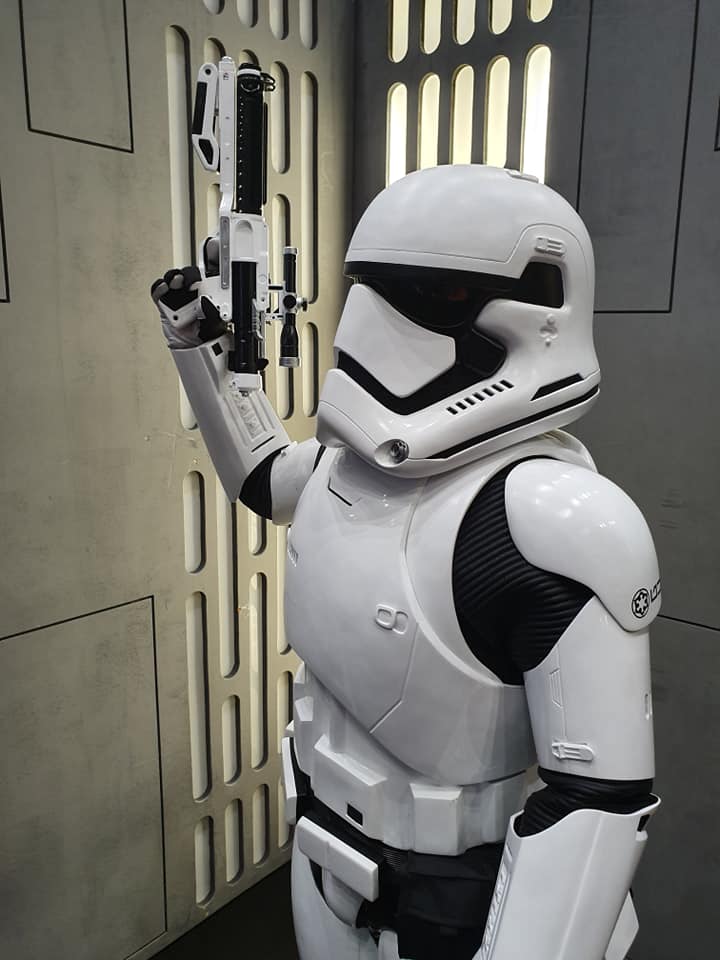 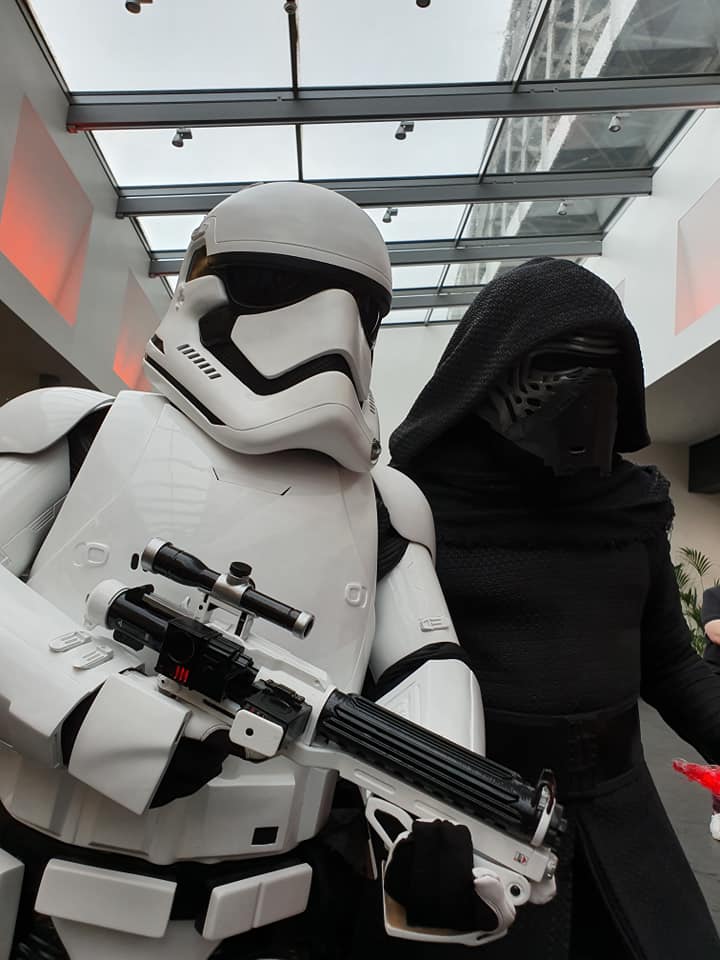 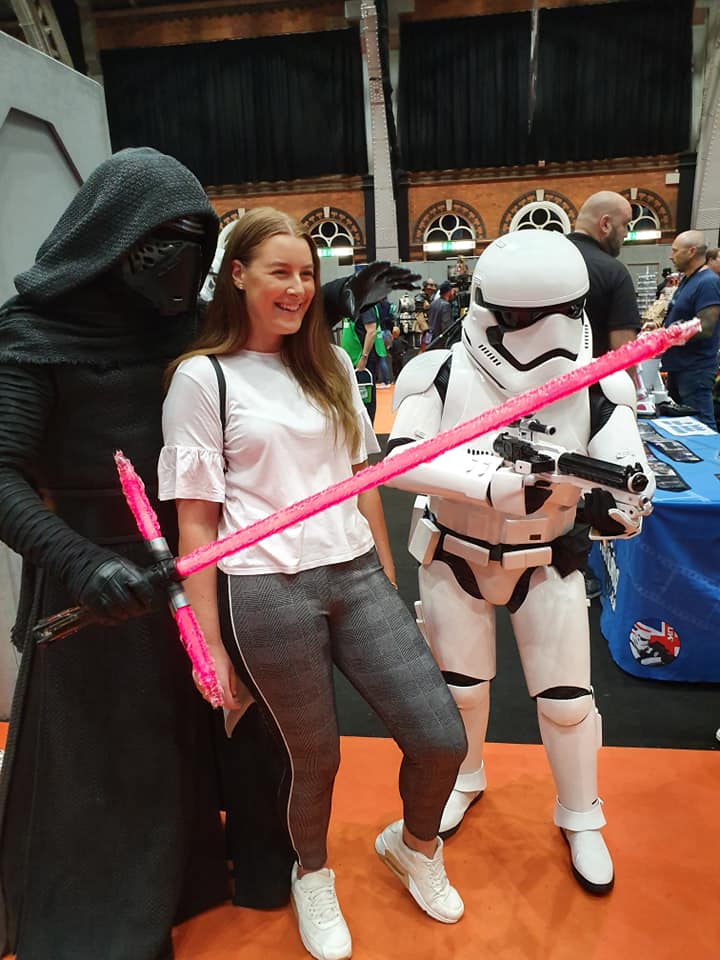 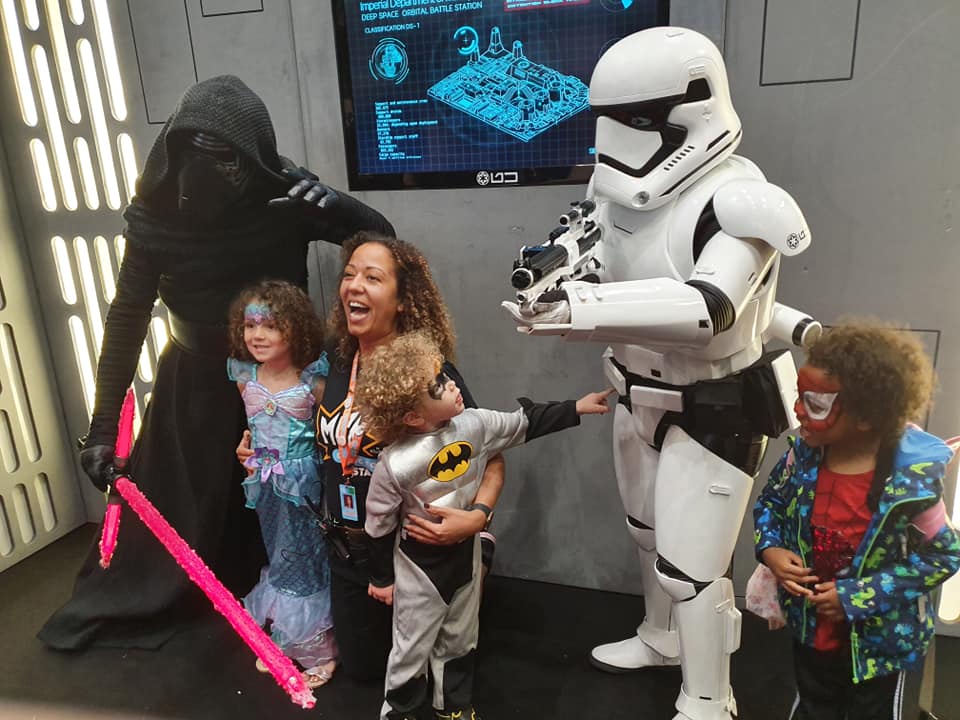 Macmillan Cancer Support were in attendance for both Saturday and Sunday, with four volunteers on Saturday and three on Sunday. The volunteers were all (bar one) from Swinton Insurance, who kindly release their staff for Charity Days. Only one of the staff had actually attended a Comic Con before, and they all enjoyed their experience.

Well done to all that costumed and staffed in the muggy and rainy Manchester heat, and I would like to thank you all for making the Charity Volunteers welcome. 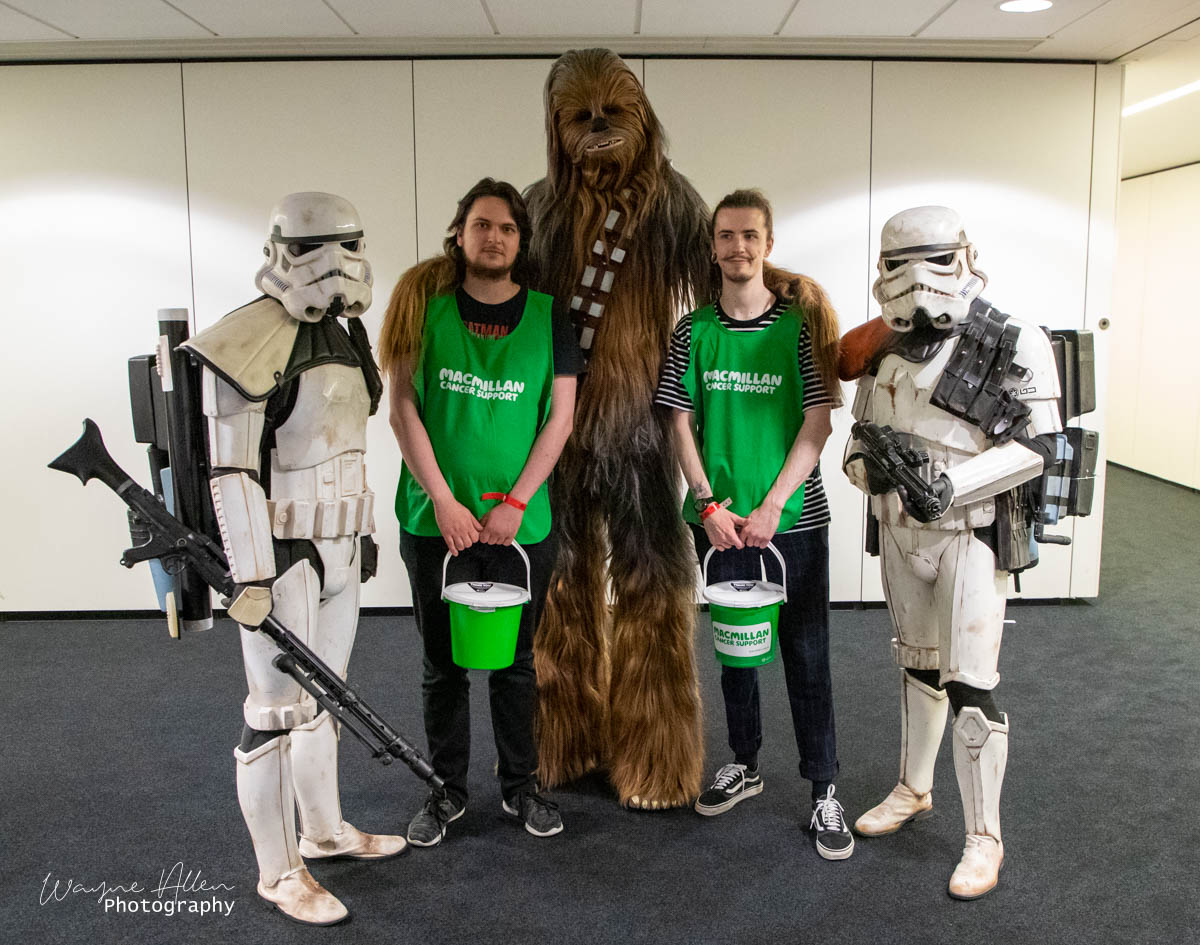 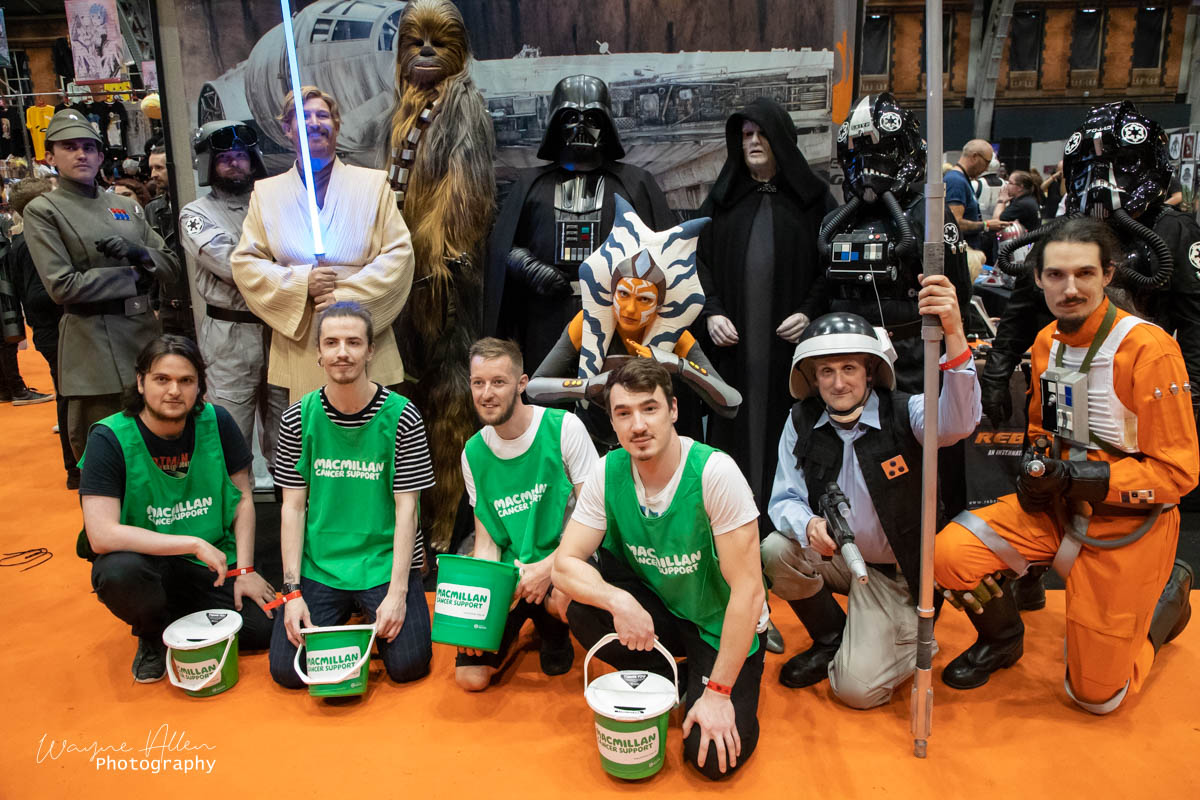 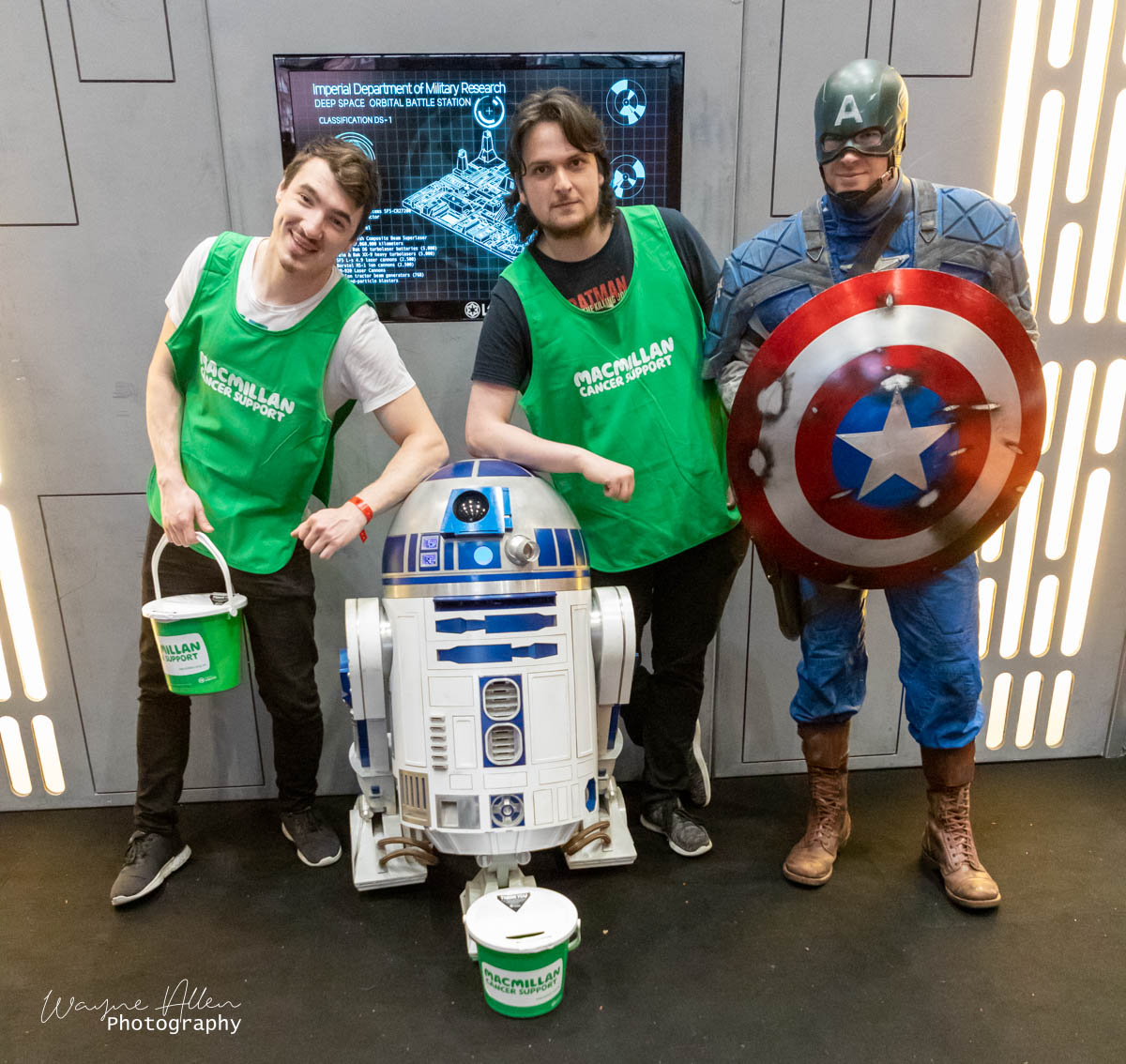 Starwars Costumers from the 501st UK Garrison presented Jim Parker, Community Fundraiser from the Royal British Legion, with a cheque for £5,000 today at the RBL Weekend Event in Thatcham. 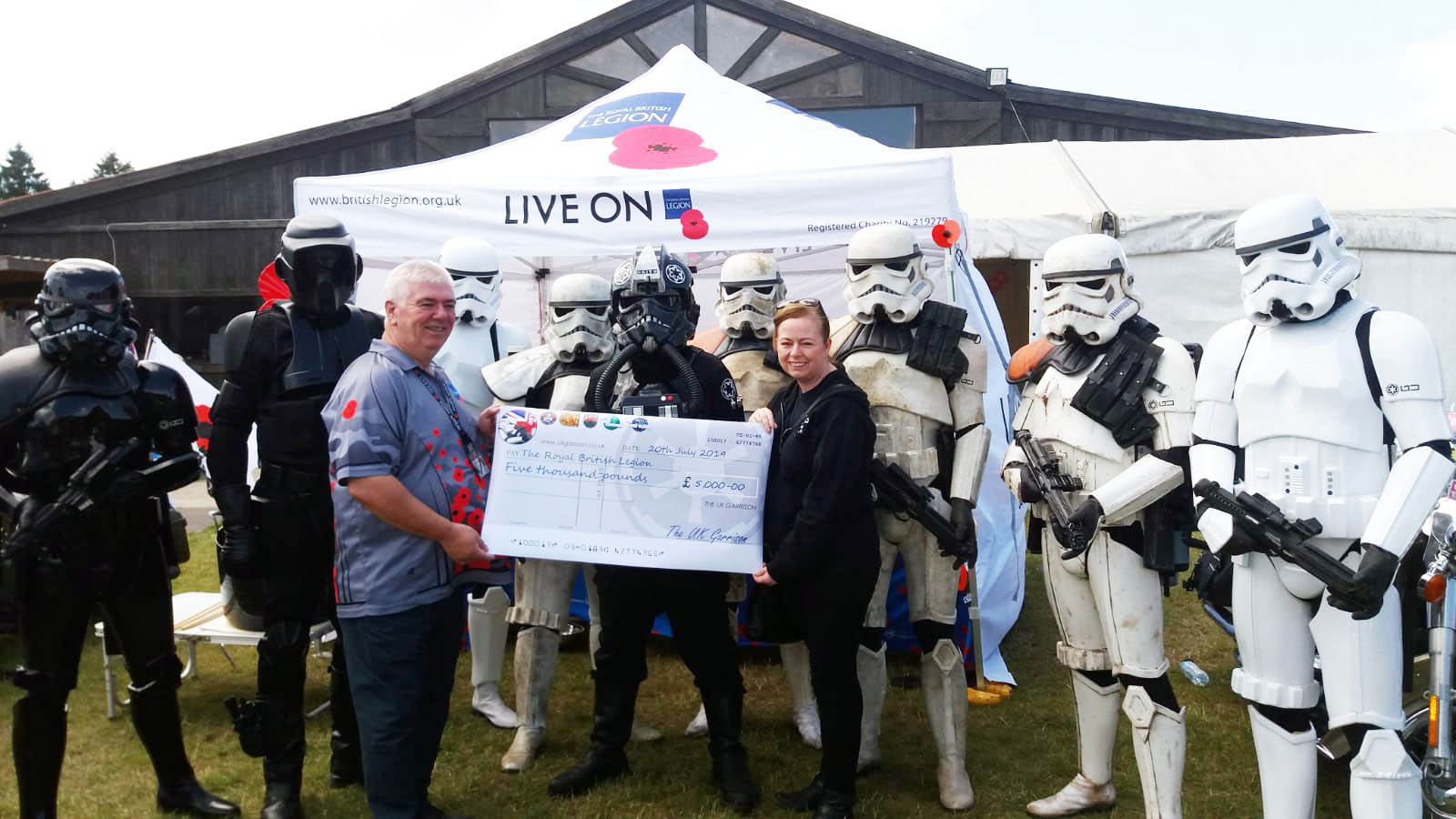 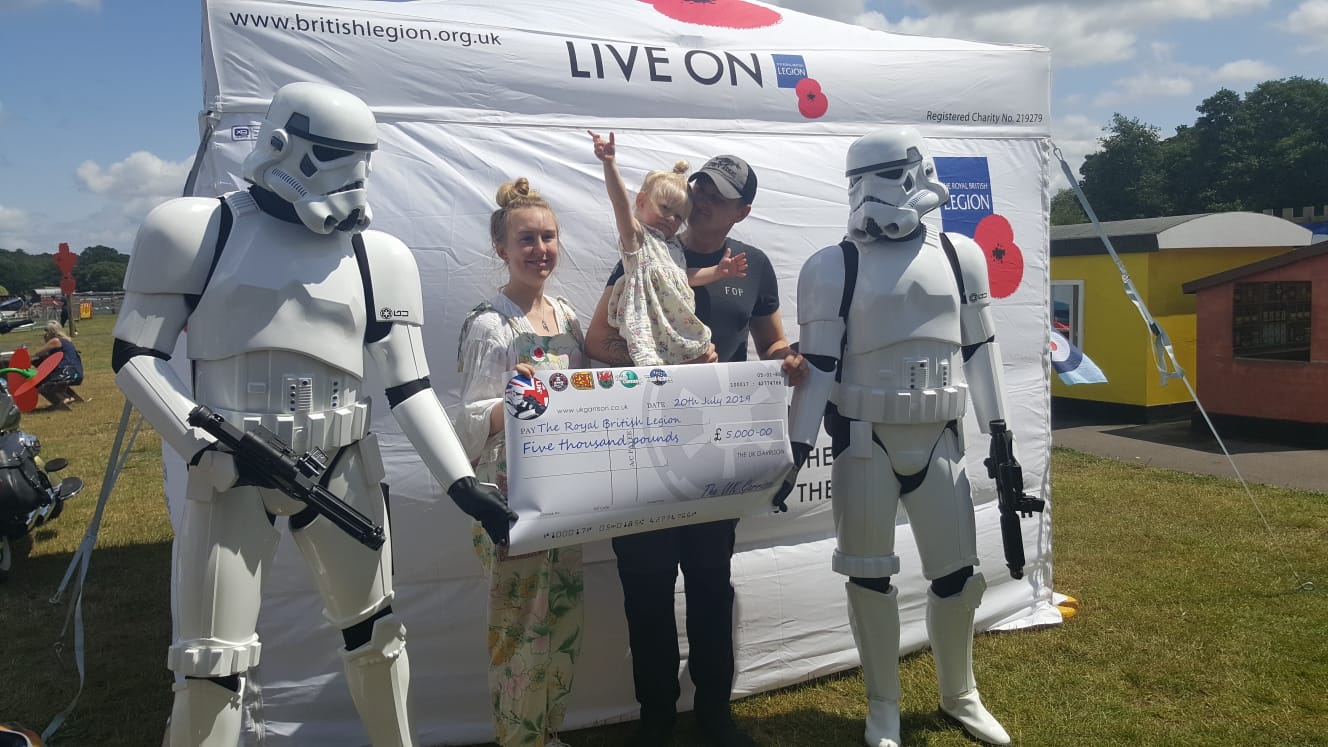