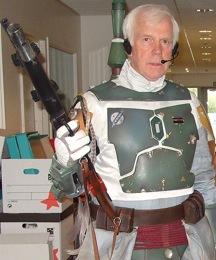 Over 30 years ago he stepped onto our screens and into the pages of history as one of the most iconic characters in the Star Wars film franchise.

On September 2009 Jeremy made his first guest appareance with the UK Garrison at the Movie Mania event in the National Space Centre.

In November 2009 Jeremy Bulloch, the actor who played the Bounty Hunter Boba Fett, once again donned his armour and officially joined the ranks of the 501st Legion, the world's largest costuming group as the character he created all those years ago.

On 17 December 2020, Jeremy passed over to the Hall of the Eternal Legionnaires, but will always be "our" Boba Fett.

For the audiences in cinemas and at home, The Empire Strikes Back captured people's hearts and imagination. As the then second installment of the original Star Wars trilogy, Boba Fett became one of the most hated characters, when he took the bounty on the head of heartthrob Han Solo from the ultimate bad guy, Darth Vader.

Steve Hird, responsible for ensuring costume accuracy for the 501st UK Garrison said; "It was one of the strangest things I have been asked to do, but an absolute honour. I mean how could I question the real Boba Fett, he is The Bounty Hunter after all!"

Jeremy has become the second original actor from George Lucas' epic movies to join over 8,500 dedicated fans in 47 countries worldwide, who collectively help to raise hundreds of thousands of pounds for children's charities, showing that the Dark Side really does have a heart.

Jeremy Bulloch said: "I am completely honoured, not only by the work that has gone into creating this amazing costume, but also to be welcomed into a group of such wonderful people."

The costume was created by members of The Dented Helmet, a fan based forum dedicated to costuming excellence in the underworld of Bounty Hunters, as a mark of respect for Jeremy's support of the fans and the hard work they put into creating the costumes and more importantly the bringing to life the characters from movies, books, games and comics.

Bulloch was born in Market Harborough, Leicestershire. He is most famous for his role as Boba Fett in The Empire Strikes Back and Return of the Jedi. Additionally, he played an Imperial officer in The Empire Strikes Back and Captain Colton in Revenge of the Sith. He has also appeared in three James Bond films, twice playing Smithers, an assistant to Q. In 1962, he starred alongside Cliff Richard in the hit musical Summer Holiday.