THE Force was with Ark Cancer Centre Charity volunteers when they teamed up with members of UK Garrison and Festival Place staff for a special Star Wars event. 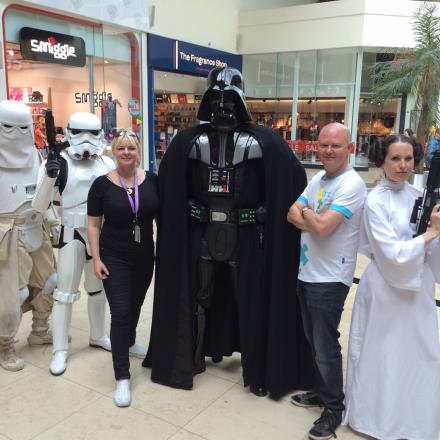 The charity, which is raising £5million towards a state-of-the-art cancer treatment centre, collected nearly £1,300 after generous shoppers gave donations in exchange for having a photograph taken with a number of characters from the hit science fiction saga including stormtroopers, Darth Vader and Princess Leia, earlier this month.

"The UK Garrison members are all volunteers, and on behalf of the charity, I would like to thank them for giving up their time and putting on what was a memorable, entertaining and very popular and successful event. To raise nearly £1,300 is a real boost to the charity."

Read the full article by Jessica Bave of the Basingstoke Gazette.

Tweet
More in this category: « Bride surprised her Star Wars fan groom with Stormtroopers... then they got a meteor shower Return of the Garrison: Star Wars at the National Space Centre »