Earlier this year Fox approached the UKG to help them promote the Blu-Ray release of Star Wars. Obviously we jumped at the chance. Back in August we attended the Empire Magazine Event at London's O2 Arena, where along with Mr C3PO himself (Anthony Daniels) we drew attention the upcoming release. We even featured heavily in their magazine. This proved to be a great start to the new relationship between Fox, their PR company and the UK Garrison.

A jump forward to September and the start of a very hectic week for myself and the UK Garrison. First up was an appearance with Anthony Daniels on Soccer AM, a soccer style TV magazine that also covers cool in-trend stuff. A 6:30 start did nothing to stop the UKG doing what they do best. Anthony was completely out of his depth. He confessed to us he knew nothing about soccer and cared even less! This did not, however, stop him from stealing the show. He was fantastic and really upstaged the regulars on the show.

The following Monday, the day of the release, several troopers and Darth Vader were all to parade the famous Changing of the Guard outside the Palace. The boys changed in a local hotel and then, through London rush hour, we marched the half mile down The Mall with commuters chasing after us for pictures and buses stopping so that people could watch the Empire invade London.

After arriving at the prearranged area and convincing the officers of both Palace Protection and the Armed Response Units that we were not going to storm Downing St, the shoot went off without a hitch and seeing Vader and Stormtroopers with the Palace in the background was just amazing.
Later on in the day we moved to a disused platform for Charring Cross tube station were a train awaited us for another photo shoot. We actu-ally held up the new Angelina Jolie movie whilst we had various candid shots of us on an underground train with commuters (local students they had rounded up to help) looking on. This was great fun and featured as an article on Page 2 of the Daily Mirror the following day!

Wednesday saw two of our TKs and Lord Vader featured on The Alan Titchmarsh Show where Mr Daniels was a special guest. They were so impressed with us that instead of the host coming to the fore at the top of the show, they asked Lord Vader himself. It was an impressive way to start a show. Two TK‟s flank the stage and they stood like statues throughout. They really did look like Stormtroopers and marched off ex-actly as rehearsed. Awesome work from the two of them! 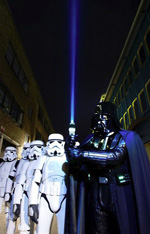 The culmination of the week was on Thursday. It started with an early morning appearance on DayBreak.

That evening was the Official Launch party at the BT Tower. To say the stunt was ambitious is an understate-ment. One of London's most famous landmarks in London was to be turned into a giant Lightsaber. After we were changed we went straight to work as 'security' ushering in the celebrities and keeping out the riff raff. The camera flashes seemed to never stop with us being photographed more than most of the stars that had showed up. The appeal of Star Wars is a long way from dead. We featured on the BBC news that evening and in many periodicals after the event.

At 20:30 we were all taken to the main area upstairs and stood by whist the countdown began. Anthony pushed the huge button and we saw a live feed to what was going on outside the building. You can see the pictures but I assure you they just don't do it justice! After mingling with the crowd and having more pic-tures taken and various arrests etc. we were finally allowed to go back down and finish after another exhaust-ing but fun night. Well not quite...Fox had found a vantage point outside with the Tower in the background, where they would be able to shoot a picture where it would look as though Vader were holding the tower as a Lightsaber.

As this was half a mile away, we got the Dark Lord a taxi (there was no way he could have walked) we got as many helpers together as we could and off we marched, no stopping!! We spent about twenty minutes making the most of this bizarre photo opportunity and then marched back in the same fashion. These pictures went all around the world and I am so pleased we did it!!

It was a very tiring week but an amazing experience! The UKG were part of something truly special and proved that the Star Wars franchise is still as popular today as it was in 1977.

Tweet
More in this category: « The UKG visit DMRC Headley Court and present a cheque to MediCinema Event: The Lions Club of Reading »