The Force Awakens… the UKG 6 from Episode VII

The UK Garrison has six troopers within its ranks who after signing strict non-disclosure agreements with LfL over 18 months ago have had to live with the hardest secret they have ever had to keep.

But now the Garrison has at last been given the official all clear to release this exciting news!! 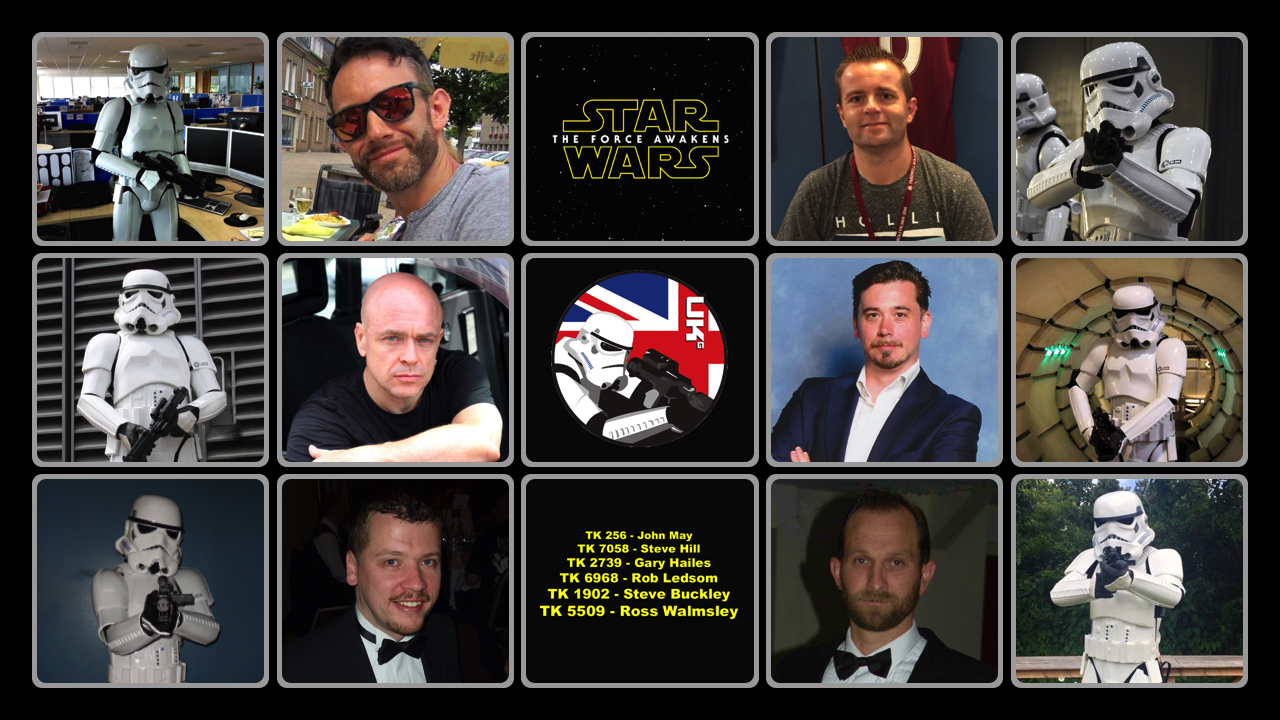 ..... A long time ago in a galaxy far, far away......... well actually it was May 2014 at MCM London Comic Con when we were honoured by a visit from Mary Franklin who at the time was the Senior Events Lead for Lucasfilm Ltd.

Unbeknown to any of us, she was on a secret mission that weekend!

About a month later, Gary Hailes, our Commanding Officer, and Steve Buckley, our Events Coordinator for Lucasfilm and Disney events, received an email from Mary marked “In Total Confidence – For Your Eyes Only” explaining that in recognition of the good work that the 501st Legion does, they were exploring the possibility of using certain members of the UKG as Stormtroopers in Episode VII.

Mary had compiled a list of five names that she had hand picked after her visit the previous month. Following further discussions with Mary, Gary and Steve went to visit Pinewood Studios Wardrobe Department to discuss the feasibility of this idea with the Costuming team.

After signing watertight NDAs, they were allowed for the first time to view the armour, to say they were excited would be an understatement. Even more so when Gary became, as far as he knows, the first ever member of the 501st Legion to try on the new helmet after one of the wardrobe team placed one on his head!!

Gary had been asked to attend as a ‘consultant’ as he did not meet the criteria so it was Steve who got to try on various sections of the armour as they needed to ascertain the size and fit.

Gary then had the pleasure of advising the members Mary had chosen of the exciting opportunity LfL was affording them. Needless to say all were made aware of the very strict NDA they would be asked to adhere to but all unsurprisingly agreed to take part.

The following week, Gary and Steve returned to Pinewood Studios with the other four chosen troopers John May, Ross Walmsley, Steve Hill and Rob Ledsom for a fitting.

The wardrobe supervisors kitted the five of them up and cleared them for filming. The producer then offered Gary a chance to kit up in the new armour also as he was there anyway. He was not expecting this but of course he leapt at the chance. Who wouldn’t?

When in armour the producer confirmed that Gary was strictly speaking too short to be included in the film. So she approached the wardrobe team and asked if there was anything they could do to increase his height so that he did not have to miss out on this opportunity.

In true UKG fashion, John May, who is one of our founder members, immediately set about making lifts for Gary’s boots from discarded foam found on the floor. Also the wardrobe guy who had dressed Gary set about putting some padding into Gary’s helmet to give to some additional height. In fact this unsung hero seemed more determined than anyone to ensure Gary made the cut and made it into the film.

Once adjustments had been made, the Producer came back in and asked Steve Buckley and Gary to stand next to each other to get a sense of proportion. All the while, the tallest trooper Steve Hill was slowly moving further and further away and bending his knees in an attempt to help Gary out.

Finally, after what apparently seemed like a lifetime to the guys, the producer said YES – Gary was in!!!

Although we do have a sneaking suspicion this may have been Mary’s plan all along.

And that is how the 6 from VII came to be.

After a very long and extremely tiring day that had started at 5am and with the guys not getting home until gone 9pm, it was over. The experience had been magical and the treatment they had received during the whole experience from everyone there was superb.

The guys were shell-shocked, it wasn’t real, and they just could not believe it.

It has been so difficult for all of them to keep this secret and to not tell anyone particularly their fellow members and of course the public when they have asked us numerous times if the 501st had been asked to appear in the movie. So apologies to all who were by necessity, fibbed to a little bit over the last 18 months or so.

We hope you will forgive them!

Tweet
More in this category: « Anthony Forrest joins the UKG UK Garrison participate in Rogue One press stunt for Disney and Lucasfilm »