Szen Ong, why I joined the UKG

Each member of the UKG has a different reason why they decided to build their costume and join us but this one from new member TD 40803 - Szen Ong is very, very special as Szen tells us below: 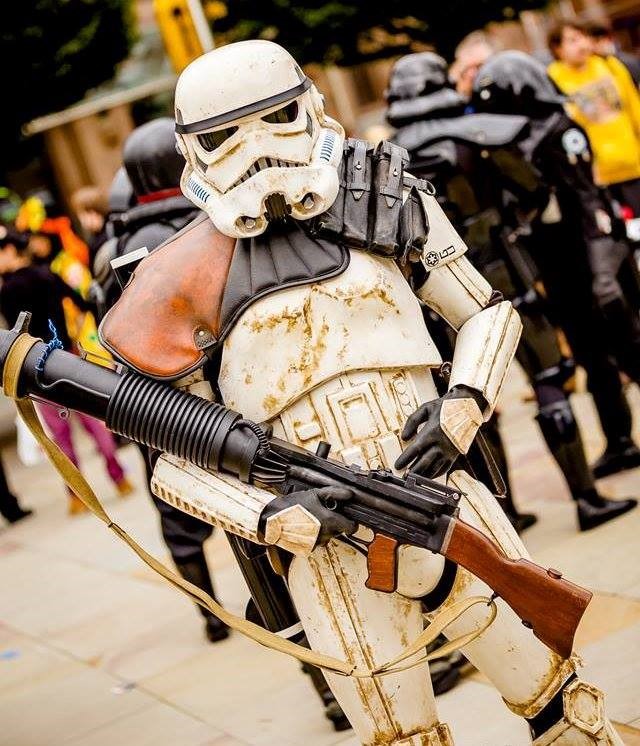 "26 months ago, my nearly 12 year old daughter, Annamaria Ong, was diagnosed with Stage 4 Alveolar Rhabdomyosarcoma, a very aggressive form of childhood soft tissue cancer. Being an avid Star Wars and cosplay fan, just like her younger brother, Marco, and having met many Stormtroopers at the Cons and other charity events, one of her wishes she had for when she got better was to join the 501st as a full-fledged Sandtrooper. Why a Sandie? "Because they look tough and really cool!", she said. But alas that was not to be... she lost her battle with cancer and died on Boxing Day, 26 Dec 2016. Thanks to a close family friend, fellow cancer parent and UKG member, Paul Bullock (TK/TB 3046), members of the Garrison turned out to form an Honour guard for her at the funeral in January this year.

It was shortly after her funeral that we decided that we needed to somehow try to make this unfulfilled wish of hers come true... to join the 501st in her stead. So after 4 months of much effort with costumes and scratch-building a lot of our kits with tons of help and advice from the Dirty Boys in the Britannia Patrol we finally managed to fulfil her wish in July. Firebrand Cadet Marco, CMAN-3150, got his costume finished and accepted into The Galactic Academy while I got myself cleared and inducted into the UKG at the recent MCM Manchester Comic Con as an ANH Sandtrooper, TD-40803. And the real icing on the cake, my Legion ID is her date of birth - 4 August 2003.

Welcome to the UKG Szen, we are honoured to have you join us and to take on this dream of Annamaria's in her memory. We are sure she would be immensely proud of you especially when you troop with us as a proud Sandtrooper.

The Ong family have set up a fundraising page in memory of Annamaria to support the research of Professor Janet Shipley at The Institute of Cancer Research in Sutton. Her research group is currently focused on identifying molecular markers for high-risk, young onset sarcomas and on understanding the associated molecular mechanisms in order to derive new treatments for the young patients.

Tweet
More in this category: « UK Garrison participate in Rogue One press stunt for Disney and Lucasfilm The Isle of Wight Garrison! »